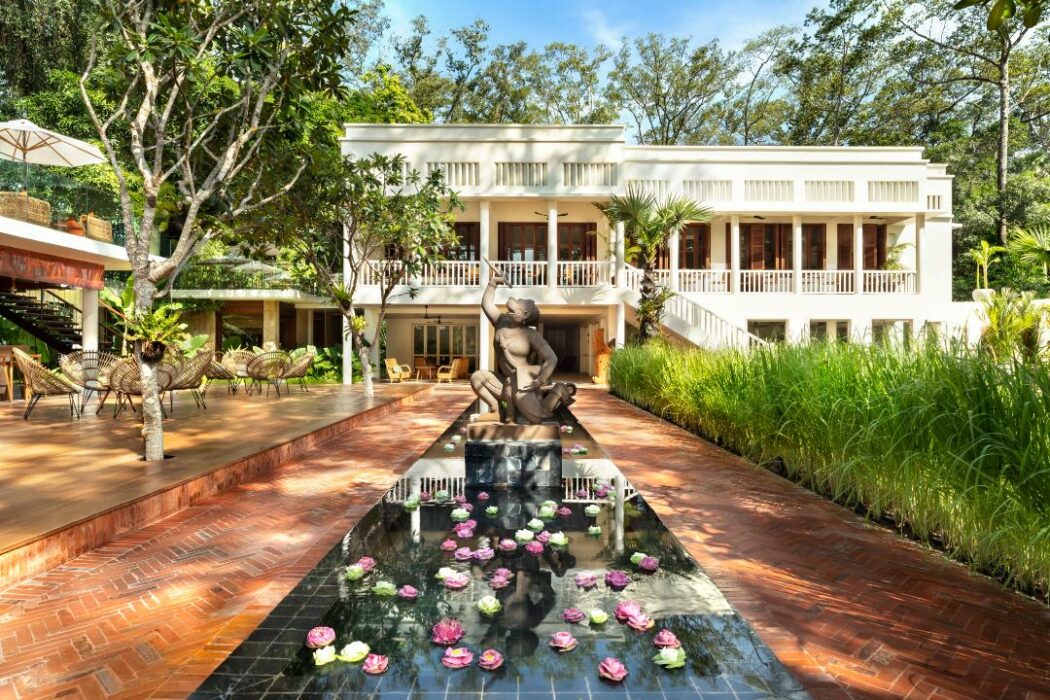 Avani Hotels & Resorts is to add to its collection of stylish hotels that won’t break the bank with a new hotel on Chaweng Beach in Koh Samui opening this summer. The hotel brand combines modern style with standout architecture and local touches for under £150 per night ranging from an art-deco governor’s mansion in Cambodia, to a modern boutique hideaway in Laos and a city hotel with a cool rooftop bar with views over Bangkok.

Avani Chaweng Samui Resort’s bold and fresh design is inspired by the glitz and glamour of travel in 1950’s America, with a contemporary take on mid-century modern aesthetic. The 50’s vibe is evoked via high-contrast geometric patterns and curves, mirrored furniture, abundant use of metallic and opulent fabrics. To promote socialising, the architects kept Avani Chaweng’s footprint intimate. In addition to 76 rooms, the property will feature a swimming pool with a multi-level deck cabanas for mingling and a social bar that doubles as a check-in area for guests who want to keep things casual.

The starting price for a room is due to be around £100 per night with breakfast.

Featuring 92 spacious guest rooms, suites and private pool villas overlooking the Andaman Sea, Avani+ Koh Lanta Resort, which opened in January, incorporates Thai influences throughout its design. Drawing on inspiration from the Arab and Chinese seafaring heritage from nearby Lanta Old Town, accommodation has hand-drawn wallpaper of Melayu motifs that derive from the traditional patterned Malaysian woodcarvings introduced to the Thai people from the trading days and classic chinoiserie floor tiles.

Nightly rates at Avani+ Koh Lanta Resort start from £112 based on two sharing an Avani Pool View Room, with breakfast, including taxes. To book visitwww.avanihotels.com/en/koh-lanta-krabi

Based on the banks of the Siem Reap River, next to the Royal Residence and minutes from the old market and temples at Angkor, FCC Angkor by Avani is a French governor’s mansion turned buzzy hotel.

The Mansion, an art deco-style 1960’s villa that is now home to the hotel’s restaurant, has been renovated and expanded in neoclassical style, with local touches including artisanal textiles and Apsara sculptures. The hotel features an art gallery in the lobby and rooms lookout onto a central courtyard where the swimming pool is shaded by centuries old Banyan trees.

Nightly rates at FCC Angkor by Avani start from £120 based on two sharing an Avani Deluxe Room, with breakfast, including taxes. To book visitwww.avanihotels.com/en/angkor-siem-reap

A modern boutique hideaway with a storied history in the heart of Luang Prabang old town, Avani+ Luang Prabang Hotel is converted from a bungalow that originally housed French military officers. Built around an ancient Banyan tree that dates back hundreds of years the hotel combines contemporary style with the authenticity of the UNESCO World Heritage destination.

French neo-classical architecture is integrated into rooms and suites with teak flooring, indigenous fabrics such as hand-stitched waxed batik cloth and French louvered doors that open onto private balconies and terraces. Hmong patterned canvases hang on walls and there is an open-air library with books and photography on Asian history.

Nightly rates at Avani+ Luang Prabang start from £85 based on two sharing an Avani Deluxe Room, with breakfast, including taxes. To book visitwww.avanihotels.com/en/luang-prabang

Avani Victoria Falls Resort is located in the Mosi-oa-Tunya National Park, on the banks of the Zambezi River. Guests have unlimited access to Victoria Falls which are just a five-minute walk from the hotel.

The resort has the feel of a centuries-old walled city, reflecting the richness and diversity of the land’s heritage. Earth-coloured buildings feature turrets and chimneys and a large lawn and swimming pool are at the centre. Well-polished smooth stone floors, combine with colourful mosaic tiles, pattered fabrics and vibrant African artwork to create a sense of place.

Nightly rates at Avani Victoria Falls Resort start from £153 based on two sharing an Avani Standard Room, with breakfast, including taxes. To bookvisitwww.avanihotels.com/en/luang-prabang

Overlooking Bangkok’s Chao Phraya River, Avani+ Riverside Bangkok Hotel is a 26-story modern hotel. Open plan spaces, light wood, high ceilings and big windows combine to make the most of the expansive city views. The rooftop 25m infinity pool is both a place to be seen and escape the bustle below. SEEN at Avani+ Riverside’s is one of Bangkok’s hippest rooftop bars and restaurants. A 1980’s-meets-artdeco hideaway, it is located on the 26th and 27th floors of the hotel and serves a modern Portuguese-Brazilian menu overseen by celebrity chef Olivier de Costa.

Nightly rates at Avani+ Riverside Bangkok Hotel start from £99 based on two sharing an Avani River View Room, with breakfast, including taxes.

About Avani Hotels & Resorts
Launched in 2011, Avani Hotels is part of the global hospitality group Minor Hotels (BKK: MINT) and was designed for the millennial-minded traveller whose priorities are style, value and comfort. Avani is an upbeat and contemporary hotel concept that delivers the perfect balance, with a focus on good sleep, designed social spaces, locally inspired sustenance and friendly service.