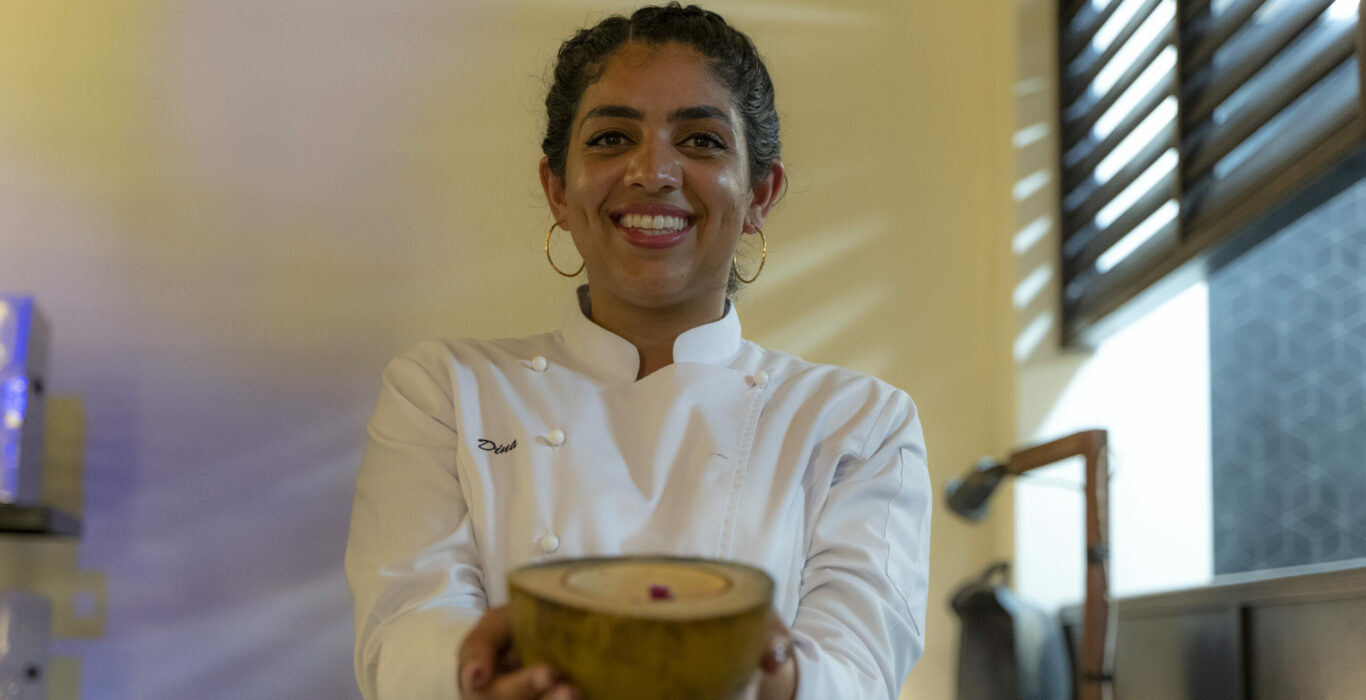 Al Baleed Resort Salalah by Anantara in southern Oman will be bringing together some of the world’s top Michelin starred chefs this November for a culinary extravaganza. The only luxury international food festival of its kind in Oman will see chefs from the UK, France, Germany and Portugal host six days of interactive workshops and gourmet dinners.

Held from 22 – 27 November 2022, the Al Baleed Food Festival is returning to the beachside resort for a second time following its success in 2021 in what will become an annual event. This year’s highlights include: award-winning pastry chef, Claire Clark MBE; Dina Macki who specialises in Omani cuisine and three Michelin starred German chef, Thomas Bühner. The six-day event, sponsored by Oman Air and the luxury fragrance house, Amouage, will culminate in a ‘Night to Remember’ which will see the chefs come together to each prepare a dish for a grand finale.

The chef’s joining the food festival are:
Claire Clark MBE
Claire is creating a British high tea experience that will showcase her creativity and passion for pastry, served every afternoon from 3 – 6pm in open-air beachside restaurant Al Mina. Widely regarded as one of the best pastry chefs in the world, UK born Claire Clark, was awarded an MBE in 2011 in recognition of her achievements and commitment to her craft. Claire has worked in some of the very best restaurants and hotels in the world including Chef Thomas Keller’s three Michelin star restaurant, The French Laundry in California and as a senior pastry lecturer at the Cordon Bleu culinary institute.
Dina Macki
Born and raised in the UK to an Omani & Zanzibari family, Dina’s food is heavily influenced by her Middle Eastern background, particularly Oman’s maritime heritage that allows Dina to combine Asian spices, with the colours of Iran, home comforts of the Middle East and Africa and a touch of the West. Dina’s recipes have been widely published in magazines and she also has her own range of Omani spice blends. Dina’s menu will highlight her devotion to fresh local ingredients from the surrounding waters of Salalah.
Thomas Bühner
With three Michelin stars under his hat, Thomas Bühner is one of Germany’s most acclaimed chefs with a career spanning more than 20 years. Thomas takes a purist approach to cooking, placing individual ingredients natural flavour at the heart of his cooking to ensure each dish maintains its authenticity. Furthermore, Thomas follows a low-temperature cooking style to intensify the flavours and puts emphasis on his range of cuisine with ingredients being playfully arranged on plates.
Patrick Jeffroy
French chef Patrick Jeffroy, obtained two Michelin stars in 2002 at Restaurant Patrick Jeffroy in Carantec, France. Now retired he will be once again be donning his chef hat to showcase Brittany’s culinary heritage and traditions.
Rui Silvestre
In 2015, Chef Rui became the youngest Portuguese chef ever to win a Michelin star at his restaurant Vistas Rui Silvestre in Portugal, a star that he still holds today. Rui is known for his for delicate, balanced dishes that demonstrate technical skill endowing classical Portuguese recipes with a splash of modernity.
The chef’s will each host one dinner over the five days and one interactive cooking workshop, teaching gourmands how to recreate their signature dish step-by-step. Claire Clark’s afternoon tea will be available on each of the five days.
November is one of the best months to visit Salalah when the temperature is warm and sunny and there is little rainfall.  Al Baleed Resort Salalah by Anantara lies between a spectacular long, sandy private beach and a freshwater lagoon.  With a backdrop of the Dhofar mountains and edged by the Arabian Sea, the resort is an oasis of coconut palms and architecture resembling an authentic coastal fortress.  The guest rooms include 88 one and two bedroom pool villas with personalised villa host services and separate living areas.  Guests benefit from a fitness centre, water sports centre, tennis court, beach volleyball court and large infinity pool, as well as a spa and range of thrilling experiences exploring the area.

Nightly rates at Al Baleed Resort Salalah by Anantara start from OMR 240 (£520) during the food festival, including breakfast and taxes. Dinners range from 25 – 35 OMR (approx. £55 – £77) per person, for a five-course menu excluding wine. The high tea with Claire Clark is 18 OMR (approx. £40) per person and workshops are 10 OMR (approx. £22) per person. To book or for more information visit www.anantara.com/al-baleed-salalah